The capital of Cyprus, Nicosia, is located on the banks of the River Pedieos. It is a richly historic place to visit, having been the capital of the country for more than a thousand years. It also dates back as far as the Bronze Age. The appeal of Nicosia, a bustling city with a population of 228,000, lies in the way it brings together the old and the new and provides a meeting point for many of Europe’s differing cultures. 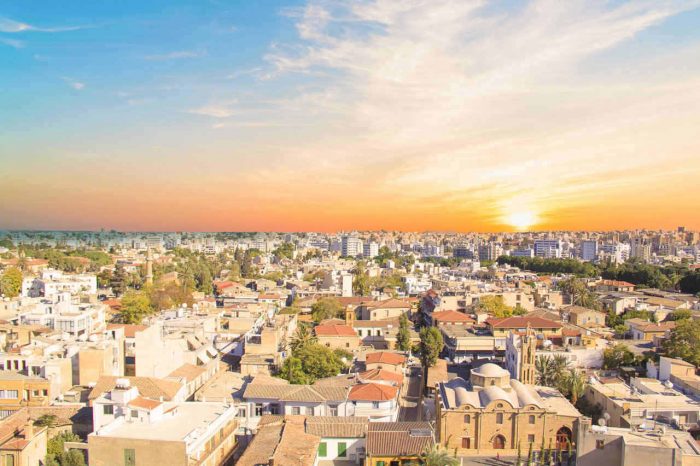 This meeting between ancient and modern finds solid form in the shape of the Old Town. The ancient centre of Nicosia is circled by Venetian walls which were built in the 16th Century. Within these walls, you’ll find tiny streets leading to museums, churches and medieval buildings. Lovers of culture and history should seek out Laiki Geitonia. This is an area which boasts both traditional buildings and independent art workshops selling modern artworks. You’ll also be able to explore the history of the city via a visit to the Leventio Museum, which is packed with items from through the centuries.

Beyond the walls of the Old Town you’ll find modern Nicosia. Charming but sleek, this is the part of the city to visit if you’re keen on retail therapy. The shops along Makarios Avenue and Stasikratous Street in the centre of the new city are where you’ll find familiar high street names and upmarket luxury goods. Out of town shopping malls within easy driving distance offer not only shopping but leisure and nightlife options.

For a novel view of the history on offer in Nicosia, more active guests might be tempted to take one of the bike tours which leave from the Central Bus Station in Solomos Square at 10 am each day. Highlights of the tour include the chance to see the striking Famagusta Gate, dating from 1567 and the view of the old town when seen from the vantage point of a bike being ridden around the top of the city wall.

Nicosia enjoys long, hot summers with very little, if any, rainfall. The highest temperatures are during the months of June, July and August, when the daily average can reach the high thirties. If this is too hot for you, you might like the months of May or October, when the average temperature drops to a slightly more comfortable 29 degrees. Although Nicosia doesn’t get very cold even in winter, the months of December and January are when the vast bulk of the city’s rain is likely to fall.