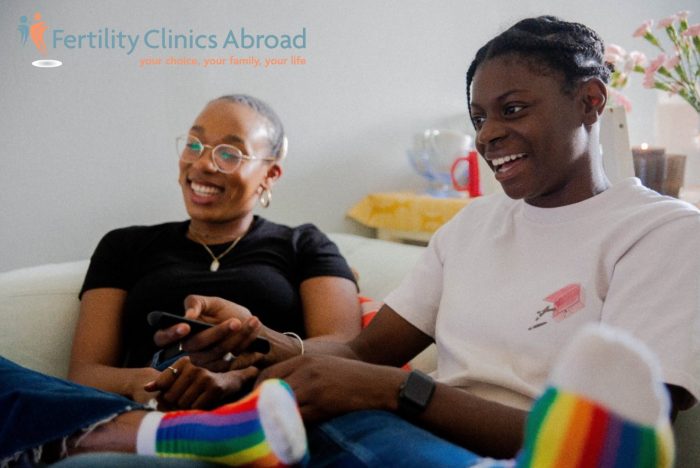 IVF for same-sex couples is offered in a number of European countries including the UK and Spain as well as in the US. By its very nature, the fertility treatments offered involve the use of sperm donors, egg donors, or both, and therefore the regulations and laws in different countries which relate to donor treatment will determine whether such treatments are available to female and male gay couples. For example, countries may have different regulations governing who may engage in sperm donation. Only in some countries, you can choose between an anonymous (coming from a sperm bank) or a known sperm donor. From a legal perspective, it is less complicated to use an anonymous sperm donation. In addition to the fertility guidelines and law, the prevailing cultural and religious foundation of each country will have a bearing on what type of treatment and support is available.

Assisted reproductive technology has been with us for 41 years now and is indeed a revolution in the family-building process. Artificial insemination involving IUI treatment and in vitro fertilization have become successful tools in the family-building journey for same-sex couples. Sperm and egg banks and the use of frozen gametes ensure that same-sex couples have a wide choice of fertility treatment options that yield excellent success rates, promote a healthy pregnancy, and help them realize the dream of parenthood.

Surrogacy (using a gestational carrier) is the main option for male gay couples. Following an initial consultation with your physician or fertility specialist, treatment options will be explained alongside noninvasive, practical suggestions like adoption.

Fertility options for lesbians, in principle, are numerous, but access to these different treatments depends on the country in which you are seeking treatment. Some countries will offer treatments supported by an anonymous donor, others will only offer treatments supported by a known sperm donor. A breakdown of some of the differences in treatment options offered by countries can be found in the guide below. In the majority of countries, however, women in same-sex relationships have the same rights as those in heterosexual partnerships.

A same-sex female couple can use the following treatments and procedures to achieve conception:

The majority of countries that offer treatments to female same-sex couples are those which have accepted the rights of same-sex couples to legally marry. This includes almost all of Central and Western Europe with the exception of Germany which has allowed same-sex marriage since 2017 but continues to deny couples access to IVF treatment.

The situation for male same-sex couples is, unfortunately, not as positive as it is for female patients. Altruistic surrogacy (where only reasonable expenses are paid to the surrogate) is permissible in the United Kingdom but the vast proportion of European countries outlaw it completely. Males looking for opportunities to build their families through surrogacy are limited to Cyprus, Ukraine, and the United States.

A list of those countries which offer IVF treatments for lesbians, same-sex (male) couples is offered below.

Fertility treatment for lesbians and same-sex couples – wrap up

IVF treatment options for women in same-sex relationships are far greater than they are for males in same-sex relationships. For women, there are a variety of treatments that are offered using donors and these treatments are available in the majority of European countries as well as in the United States. Surrogacy options for men are rather limited with only a small number of countries offering arrangements.

Availability and cost will vary from country to country and chances of conceiving will depend on patients’ medical history, fertility, and general health. Where donors are involved, however, success rates are good. Donors are invariably aged between 18 and 35 and have been screened to ensure they are free of any genetic abnormalities or sexually transmitted diseases.

Are lesbian couples eligible for IVF?

Yes, lesbian couples can access IVF treatments. There are, however, country variations based on access and you should undertake research to ensure that access is possible in the destination you choose.

How much does IVF cost for a single parent?

The cost will depend on the type of treatment the single parent is seeking. The treatment will invariably mean asking the treatment provider to identify a donor unless the patient has already done so independently. In addition to the treatment chosen the cost will also be affected by the location of the clinic. Geographical variations exist with countries such as Greece and Cyprus being universally cheaper than clinics in the United States.

Can same-sex couples do IVF?

Yes, same-sex couples (male and female) can undergo IVF. Couples will need to undertake research to find out if their destination country offers treatments and the availability of donors. It might also be important to enquire whether donors are known or anonymous.

Are same-sex couples entitled to IVF on the NHS?

Access to NHS treatment for IVF is variable, to say the least, and is based on the area in which you live. Funded treatment for male same-sex couples is not available on the NHS. For female same-sex couples, the National Institute of Clinical Excellence (NICE), which offers NHS trusts guidance on the application of IVF treatments, recommends that couples should try to conceive before accessing NHS services. Currently, the advice is that the couple should try to conceive six times using artificial insemination (in a private clinic or at home) before trying to access funded treatment within the NHS.