A couple with 5 years of primary infertility | Patient Success Stories 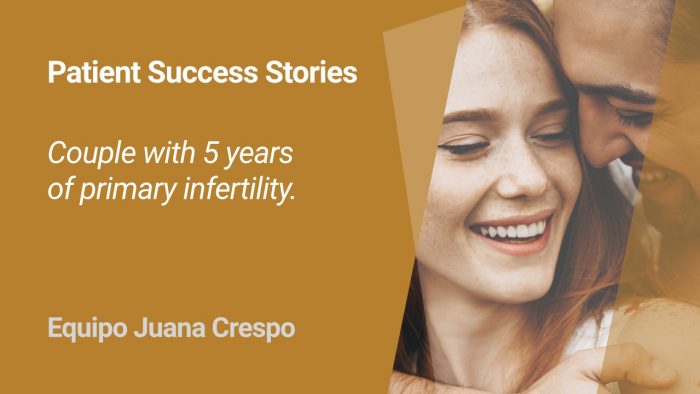 Today we present you a patient success story – a story of a couple with five years of primary infertility, who after many miscarriages and IVF failures had treatment at Equipo Juana Crespo in Valencia, Spain, where doctors turned their failures into a success. We asked Dr. Alejandra Aguilar to tell us more about the couple and their treatment at their clinic.

At the time, the lady was 43 years old and had in total three pregnancies, all of which, unfortunately, have ended in miscarriages. The first one, in 2015, was a spontaneous pregnancy that was treated with misoprostol. The remaining two were achieved using ART (assisted reproductive technology). The patient had positive ACA IgM antibodies and low Protein S. In 2016 she performed a Hysterosalpingogram (HSG) which was reported as normal.

Her partner was 36 years old and has a normal semen analysis. The couple has undergone several treatments in other IVF clinics, and as a result, a total of 22 embryos were transferred: 12 from own eggs (2D2, 9D3, 1D6) and 10 from an egg donor (2D2, 2D3, 6D5). This resulted in 2 miscarriages: one from her own eggs, and one from donated eggs.

Diagnostics – what was the diagnosis? What moved the treatment in a different direction than before?

The ultrasound scan at their first visit at Equipo Juana Crespo revealed adenomyosis in the left horn. A retro-uterine left ovary, and a total of 12 antral follicles (AFC). A copy of the HSG, a pelvic MRI, and a new visit was requested to study the implantation failure with 6 mg VE.

During the following visit, a scan was performed: the endometrium was 5.5 mm thick and had good appearance.

A diagnostic hysteroscopy (HSC) was also performed which confirmed adenomyosis in the fundus of the uterus.

What protocols and procedures were used? What was done differently?

We planned a surgical hysteroscopy to reshape the cavity and polypectomy in the cervical canal. The findings were severe fibrosis and severe cystic adenomyosis.

After the Surgical Hysteroscopy, we prescribed one Decapeptyl 11.25 mg injection, Femara 5 mg/day for 1 month and preparation with low doses (2 mg) of Estradiol Valerate and Donna plus (probiotics).

What were the results? What embryos were achieved?

We performed an egg donation cycle in which 14 eggs were donated and all of them were mature (MII). We used partner’s frozen oligospermic semen and as a result, 11 eggs are fertilized. After extended culture, we vitrified five Day 5 embryos with quality B+, B+, B, B-, C+. 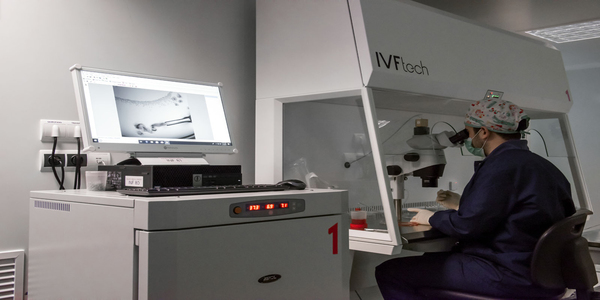 6 months after the couple’s first visit, we performed the first endometrial preparation ultrasound control as per patient’s protocol, where we saw that the patient was not ready since the endometrium measured 4 mm. So, the cycle was delayed, and we changed the protocol to Provamés 1mg/12h and Viagra 50mg/day.

A new ultrasound control after a few days showed an endometrium of 6.1 mm with a trilaminar appearance. The mock transfer was repeated to confirm the strategy: it was of moderate difficulty.

The Frozen Embryo Transfer (FET) was scheduled with a new ultrasound control on that same day before the process of embryo thawing started. Utrogestan 400mg/12h and Intramuscular Progesterone were prescribed.

The ultrasound control before thawing showed a 6.9 mm secretory endometrium and a small ball of adenomyosis towards the right horn. We went ahead and transferred 2 good quality embryos with a very smooth transfer procedure.

Ten days later the result of the BHCG (Beta-Human Chorionic Gonadotropin) was 3,233.  At the pregnancy scan, a dichorionic diamniotic twin pregnancy was confirmed and it was developing correctly! The patient was discharged at week 10 of the pregnancy. She will continue with Heparin and vitamins throughout the pregnancy.

Congratulations to the happy expecting parents!

Have you had an IVF failure before? Contact Dr. Alejandra Aguilar and find out if the fertility specialists at Equipo Juana Crespo can contribute to your own patient success story.